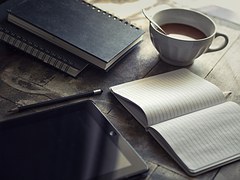 If you do the math, it’s about one book for every 2.4 days.  In honesty, however, the vast majority of those books were read in a day, with breaks in reading for a day or two between books.  I have always been a big reader.  My e-reader is ALWAYS with me.  I read on public transit, read instead of watching TV, and even read while walking to pick up my kids from school.  But reaching 150 books in one year was a lot of books, even for me. When I reached the milestone, I stopped and paused.  I obviously love books.  Always have.  Maybe it was time.  Time to see if I could write my own book.

Many years ago, while working in Human Resources in a department store, my manager was facilitating a career planning workshop for the staff.  She started the workshop by asking everyone there to tell her our fantasy job. Fantasy job?  This is not something I had ever thought about.  I went to University intending to study English and History, hoping to become a high school teacher.  I ended up getting a B.A. in Psychology instead.  After University, I went to community college to study Human Resources Management, which is how I ended up in the Human Resources department at an upscale department store for many years.

I had never in my life thought about what I would LOVE to do as a career, only what I wouldn’t mind doing.  But that day in that career planning seminar, I closed my eyes and for the first time acknowledged to myself what my fantasy job would be.  What I really wanted to do, from the deepest part of my heart, was to be a writer.

That career planning workshop was more than twelve years ago.  I’ve had a lot more education since then, and several other careers, but have never done anything to work towards my “fantasy” career.  Now, it’s time to see if I can make my fantasy come true.

The day I finished reading my 150th book in 2015, I started outlining my first novel.  And a little over a month later, I finished my goal of 75,000 words.  The manuscript needed a lot of work, but the first draft was done.  No matter what happens after that point, no one can take that from me.  I wrote a book.  Now lets see what I can do with this monster I have created.  Can I make my fantasy job come true?

View all posts by farahheron